{source}
I've told you one of my favorite things about living in the Tri-Cities is all of the produce.  Well we are up to our ears in apples lately. It is Washington after all.  And if you are here also then chances are you have that many apples too.  And if you don't you don't have to go very far to find someone who is more than willing to share theirs.  We know a couple of apple farmers and have really nice neighbors who just bring us apples so we have been getting creative.
Need some new ideas on what to do with your apples?  Here is a little taste of what we have made so far. {And what has kept me so busy this weekend!}
Applesauce, apple pie filling, apple butter, squash and apples, dried apples, can't forget EATING apples {I think Ivy eats three every day} and one of my faves  ~ apple cinnamon rolls.  My friend Kim so kindly requested the recipe so I thought I would share it here for all of you!

Apple Cinnamon Rolls
{via Gooseberry Patch}
FILLING
1 c. brown sugar packed
2 tsp. cinnamon
3/4 cup apple butter
2 c. apples, cored, peeled and chopped
1/2 cup butter, melted
Make roll dough according to your favorite recipe.  I like this one because it is a lot of dough, so you can make rolls and cinnamon rolls at the same time! Because we don't need that many cinnamon rolls around here.  Although regular rolls are just as bad since I can't resist them hot out of the oven, can you?!  But back to the recipe. ;) While your dough is rising chop your apples and mix together your filling.
When the dough has risen, punch down and place on a lightly floured surface.  Divide dough and let rest 10 minutes.  If you are making rolls also, then go ahead and do those first.  Then using your remaining dough roll into a  big rectangle.  Top with the filling.
{The recipe is for a full batch of dough so you will have some left over}
Roll up your dough , jelly roll style.  It is going to be messy and squish out the sides but thats ok.  Cut your roll into slices and place cut side down in a greased 13x9 pan.
Let rise until double, then bake at 350 degrees for 35-40 minutes.
{Since they take longer to bake is why I suggest doing your rolls first}
After you take them out of the oven and are waiting for them to cool, go ahead and make a glaze for them...
APPLE CINNAMON GLAZE
1cup powdered sugar
1/4 tsp. cinnamon
1 to 3 Tbsp. apple juice or cider
Mix together, slowly adding the juice to desired consistency, then drizzle over warm cinnamon rolls.
Seriously so good.  And definitely going on the I shouldn't make those again any time soon list!
+++
Any other fabulous ideas for apples?!  I would love some new ones.
+++
PS:  If you want or need apples I would check Craigs List, ask around, or let me know!  I've got connections! ;)

I la la love hearing from you! 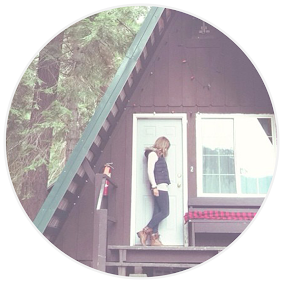